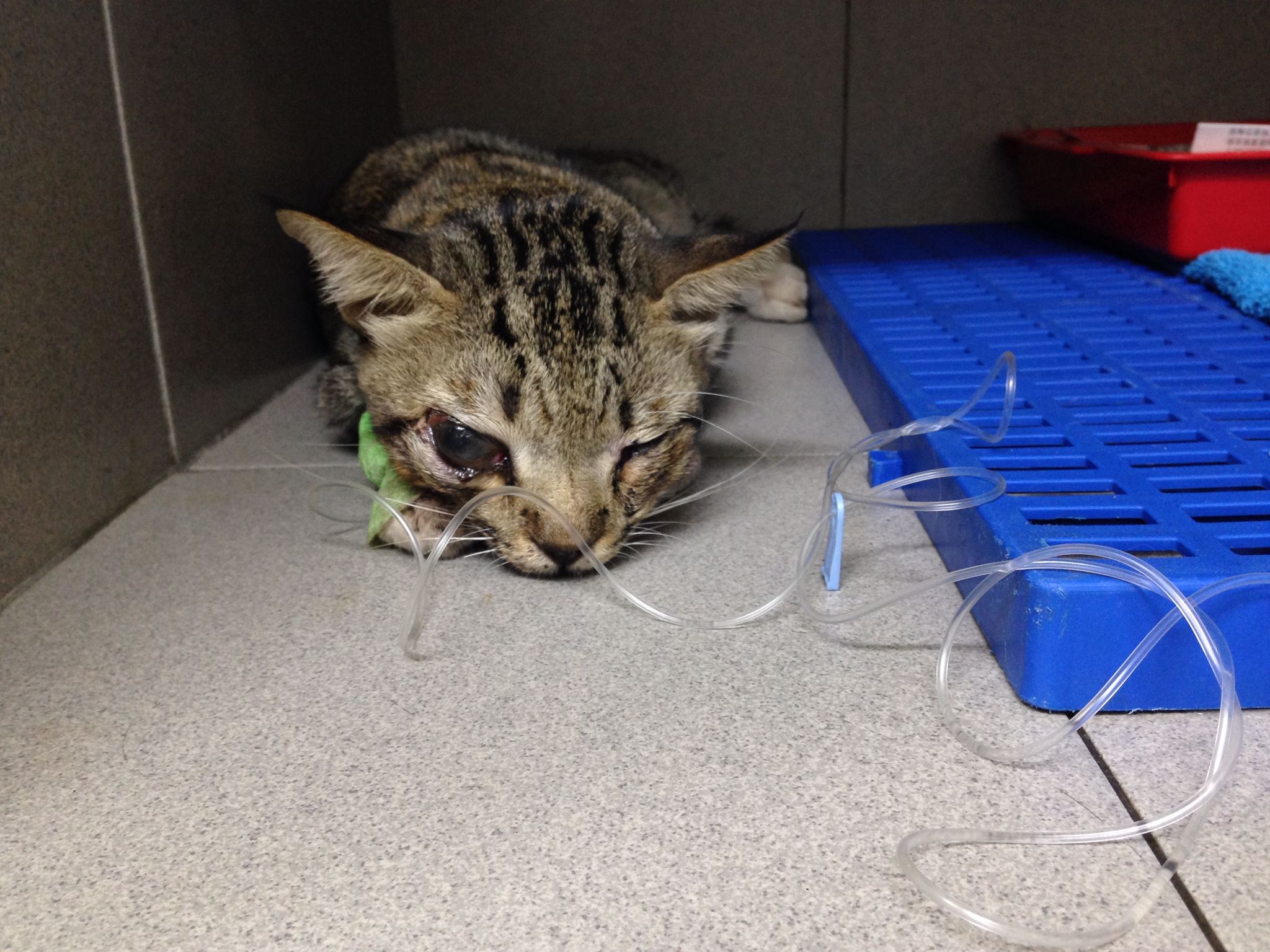 Cougar was abused by someone to the point that one of his eyeball popped out and his jaw was injured as well.

It is appalling how some heartless people tend to cause unnecessary harm to animals and this has always been a hot topic in Malaysia where we are known to have animals as our Achilles heel most of the times. Last year, an animal cruelty case where two men were caught on closed-circuit television (CCTV) camera footage for putting a pregnant cat into a dryer at a self-service launderette shocked the nation. Needless to say, this has caused an outrage from the public as the video went viral on the Internet. There were a total of three suspects wanted for the vicious crime and they were nabbed a few days after the shocking incident but so far, only one of them was sentenced to two years imprisonment while the other two pleaded not guilty. 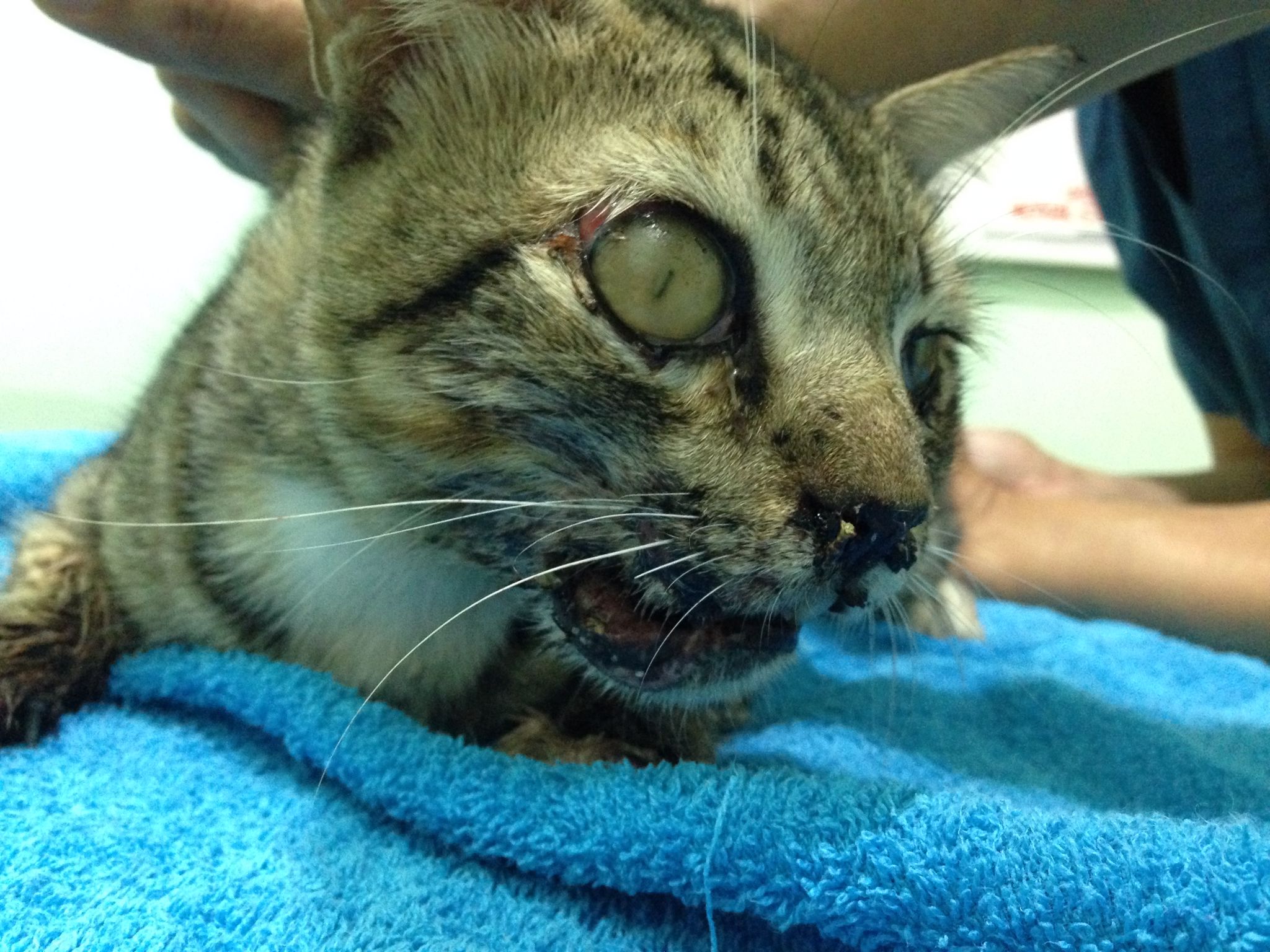 We took him to the clinic and the vet gave us advice on what to do and how to care for Cougar as he does all he can to stabilise Cougar's condition.

Some people dare not watch the cruel video, but those who did watch it know just how heart wrenching the video is. In the footage, it is clear that the cat did not, in any way, bother or disturb the launderette patrons. The carcass of the cat was found in the dryer by a customer the next morning. Perhaps you may say that the cat is at the wrong place, at the wrong time but under no circumstances should any animals be treated this way when they are just minding their own businesses. The heavily-condemned act had Malaysians burning in the flames of fury and many called for a stringent punishment on the culprits as well as implementing more severe punishments to offenders to decrease the cases of animal cruelty. 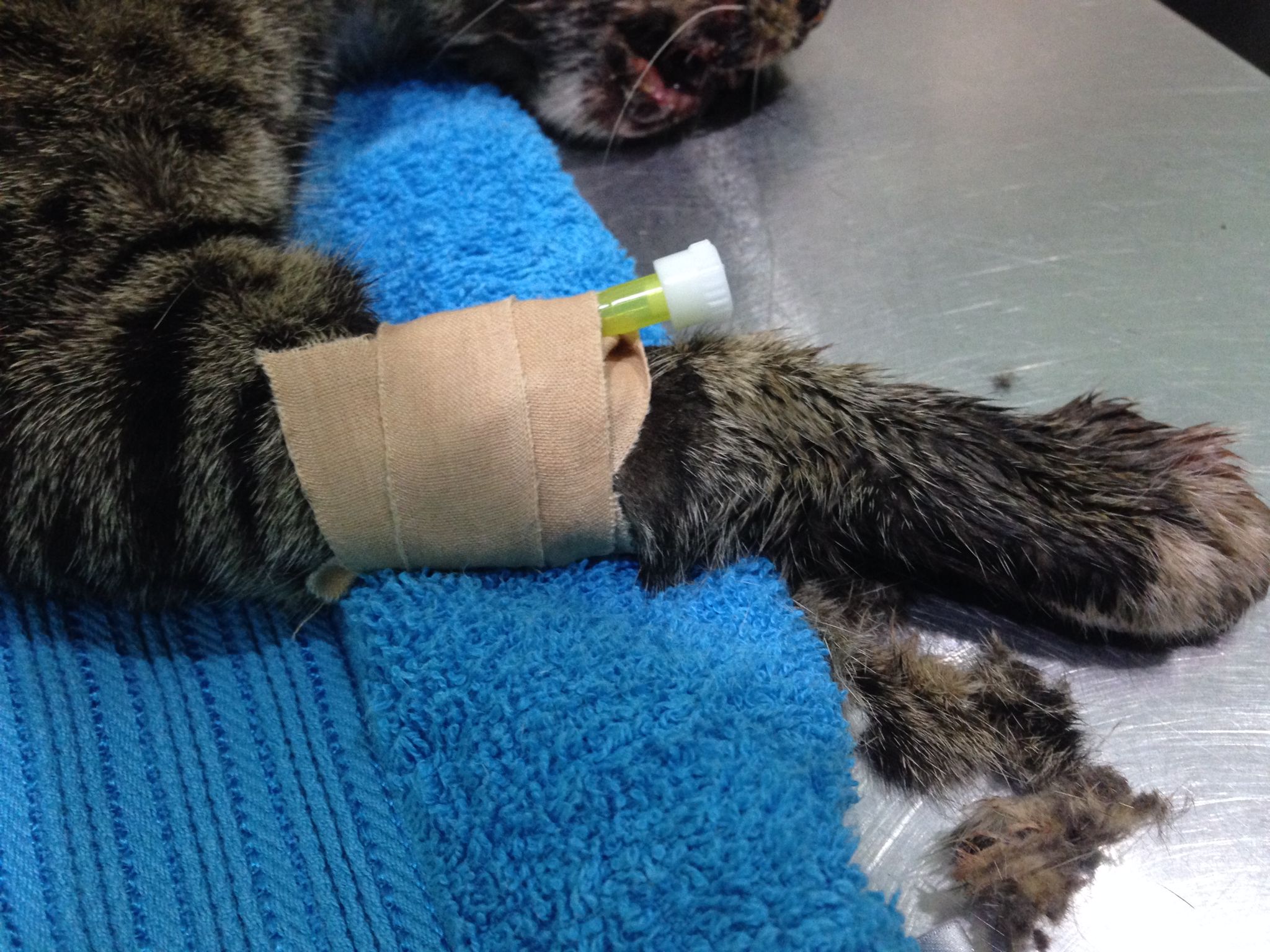 Cougar had to stay a few days in the clinic under tight observation until the end of his critical phase before we can bring him home and begin his recovery.

As much as we like to see the culprits get a taste of their own medicine and have a spin in the dryer, it is a relief to know that they are facing the law and consequences of their mindless action. Unfortunately, only one of them was put behind the bars and the accomplices are either still at large or discharged. He was charged under Section 29 (1) (e) of the Animal Welfare Act 2015 which is punishable under Section 29 (1) of the same act and read together with Section 34 of the Penal Code. Upon conviction, this can carry a maximum jail term of up to three years or a fine of RM100,000 or both. The Animal Welfare Act 2015 was refined from previous Animal Act 1953 and now expands into a wider scope with heavier penalties in helping to safeguard the welfare of animals. It is indeed a beautiful sight to see Malaysia gradually turning into a country that does not only care about the wellbeing of its citizen but also our furry friends. 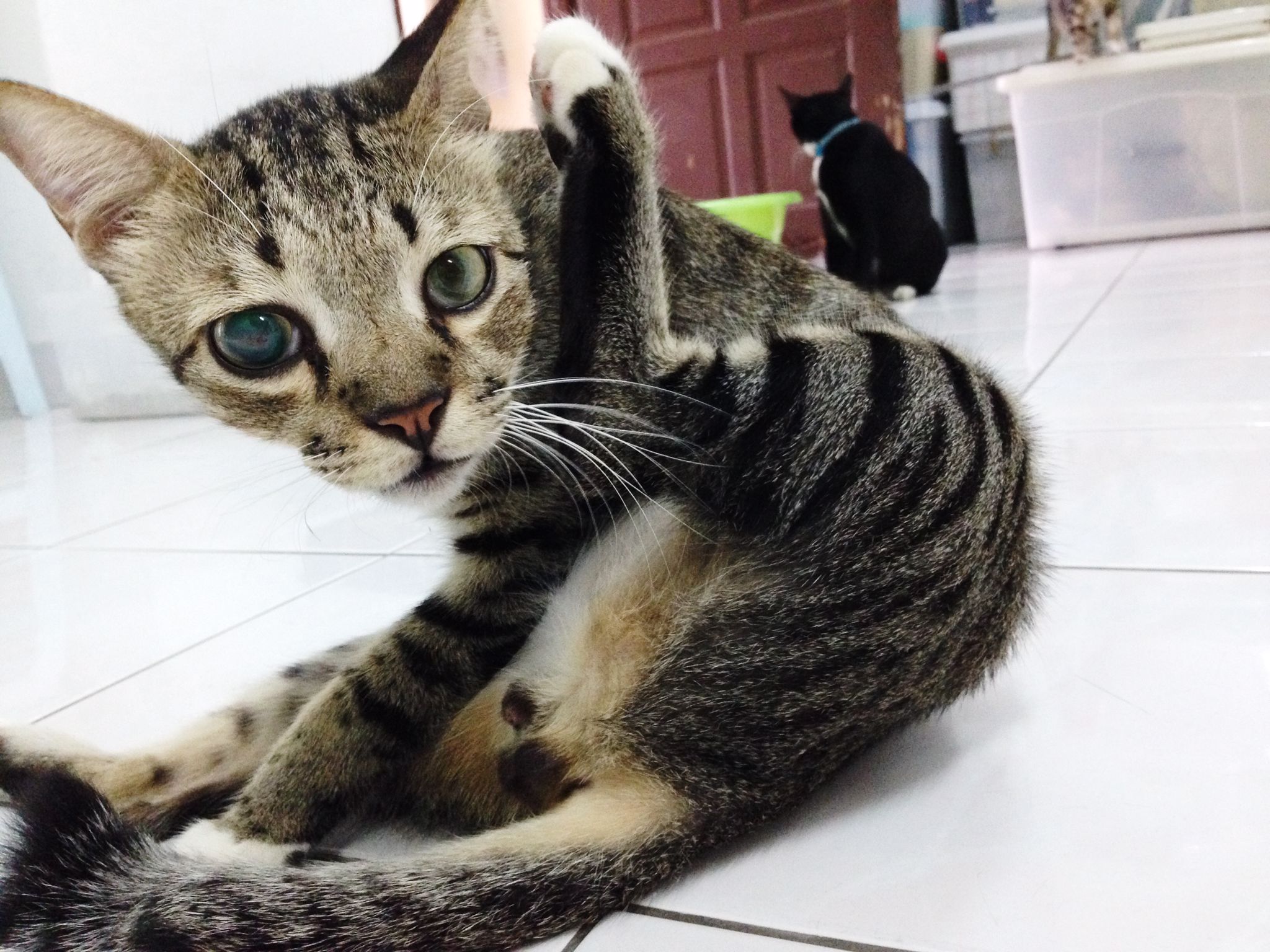 After two months of meticulous care and several consultations with the vet, Cougar has recovered well with the price of the sight of the injured eye.

Considering how animals and humans coexist together in such a green country like Malaysia, it is inspiring to see an increasing number of people who are more aware, educated and speak up against animal cruelty compared to before. A law is the most effective when everyone including the government take part in enforcing it. However, punishments and fines for animal cruelty cases may not be able to fully make the culprits learn from their mistakes. A normal, compassionate human being with conscience would not do these atrocious actions and they may need psychological help in certain situations such as rehabilitation. For instance, the offenders may have gone through some traumatic or aggressive childhood experiences that moulded them into who they are, resulting in the calloused behaviour. 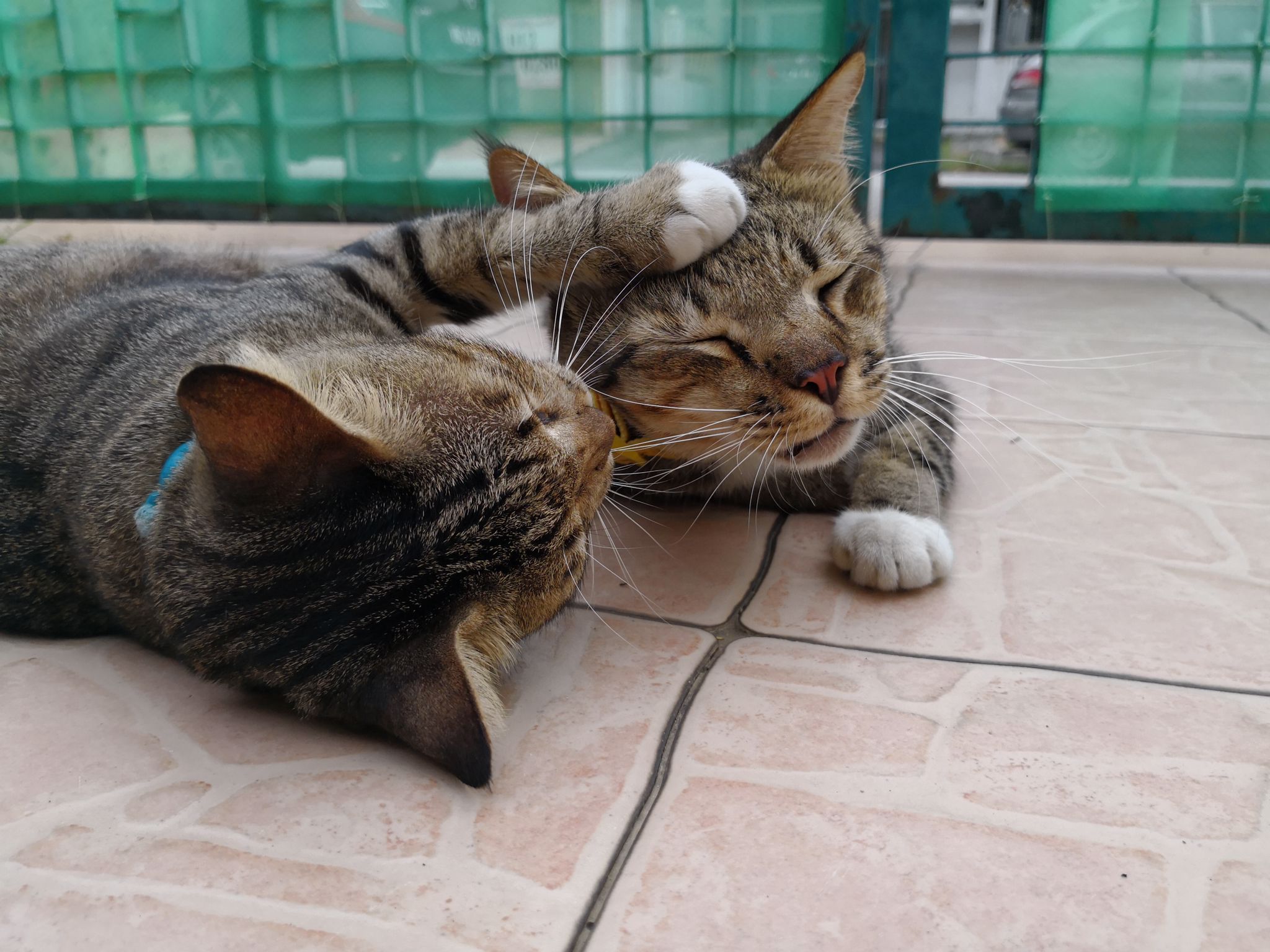 Now, Cougar lives with us healthily and happily with his friends, far far away from harm.

We have seen multiple news last year that sparked outrage among the public including the poisoning, chopping, burning of stray dogs and an abuser stepping on a kitten until death. Even recently, there were cases where dogs are dragged on the road while chained onto a vehicle. Upon investigation, the so-called owners were actually planning to abandon them. Animals are not objects and they should never be objectified. It is important that you think twice and thrice before taking responsibility on a furry companion and the last thing you should do is abandon them. Even if you're not an animal person, given that we can't expect everyone to treat animals warmly, you do not need to resort to harmful action towards these innocent living beings.

What we can do though, is to join hands and come together to protect animals and their welfare. As the case snowballed, a share of the public turned their gazes towards the other launderette patrons who did nothing to stop the incident from happening. If you were to encounter such situations and the abuser do not heed even after you have confronted them, then the best way is to notify the authorities as soon as possible. The stories of animal cruelty skyrocket as time passes and as much as it hurts, I believe that we can bring the abusers to justice if we work together to address this problem and educate the public. If we continue being lenient and closing an eye on this issue, it will only be worse in the future. If the animal abusers can be so cruel towards defenseless animals, they definitely do not deserve any mercy.